Norwegian MV “Tertnes” was the first vessel to call at Port of Esbjerg’s newly established bulk terminal. The vessel arrived with 10,200 tons gravel from Jelsa in Norway, and Blue Water acted as port agents and handled the discharging operation on 23 October.

MV “Tertnes” - with a dead weight of 11,546 tons, a length of 129 metres and width of 20.5 metres – is a modern special-purpose vessel fitted with a discharging boom increasing the discharge capacity compared to mobile grab operation. 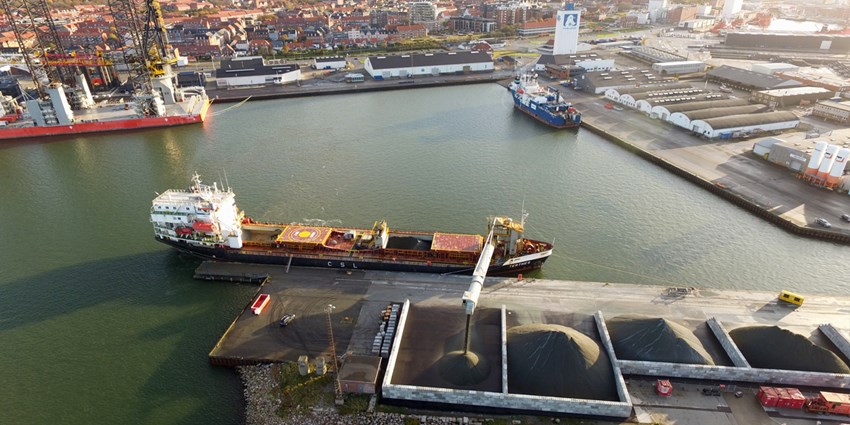 “The bulk terminal provided the ideal facility for the discharging of MV “Tertnes” as the cargo included four different fractions”, says Søren Stougaard, Shipbroker at Blue Water, who is hoping that more companies will discover that the port of Esbjerg is now able to receive larger bulk volumes.

“I do hope and believe that both existing and new clients will make use of the new terminal so that it will result in increased import as well as export volumes. I believe in this because the terminal facilitates discharge of larger volumes as well as storage for a longer period. Normally, discharge is performed directly on to the quayside where the cargo must be removed quickly”, Søren Stougaard concludes.

More business was precisely what Port of Esbjerg was wishing for when establishing the bulk terminal. “Bulk cargo has always been part of the port’s activities, but with the new terminal we increase the possibilities to facilitate bulk handling in a structured manner. We are convinced that this will generate more business to the port, and we were happy to see MV “Tertnes” inaugurating the bulk terminal and taking the first step in this direction”, says Dennis Jul Pedersen, CEO at Port of Esbjerg.