Having completed the Danish stages of the tour, the cycling teams were flown to France, and Blue Water took care of the logistics

Grand Départ Copenhagen Denmark (GDCD), a company set up in Denmark to handle and plan the Danish Tour start, chose Blue Water to plan all air transport out of Denmark.

In the autumn of 2021, Blue Water began planning the transports. Right from the beginning, GDCD emphasised the importance for this event taking place in Denmark and the ability of the airlines to solve the task on the highest international level. Early in the process, we had a detailed plan for the aircraft and operators that might be interesting to offer GDCD. Fortunately, GDCD agreed, so in January 2022 the final contract was signed.

A total of 7 flights from Sønderborg to France had to be planned. To ensure a flawless scheduling and execution of the complex flight rotations, countless meetings took place between Blue Water, GDCD, the Danish Police, the airport's management and other authorities.

An unusual and unforgettable transport task

With a desire for approx. 500 airborne people from Sønderborg Airport within 2.5 hours, the logistics had to notch up and reconcile:

"Riders, Tour de France staff and journalists had to take off within a short time at a small airport. It was an unusual task that required a lot from our team and Sønderborg Airport. We had picked out the best and right employees, who pulled together and ensured that all flights flew on time", says Torben Ravnkilde, Head of Air Charter at Blue Water.

But the excitement did not stop there. Torben Ravnkilde continues:

"At the time when the Tour field reached the city of Sønderborg - and with a short time until departure from Danish soil - we were asked by the Tour de France-organisation whether we could provide an extra plane. Shortly after the first rider had departed by bus for the airport, the extra flight got confirmed by the Tour de France organisation, and the flight departed as scheduled for France without any delay. Everything worked out to the great satisfaction to everything and everyone”.

A strong collaboration between GDCD, Sønderborg Airport, Air Alsie and Global Reach Aviation ensured a high-quality solution and completed logistics. The Blue Water Air Charter team has subsequently received high praise and thanks from GDCD and the entire circle of the Danish Tour start. 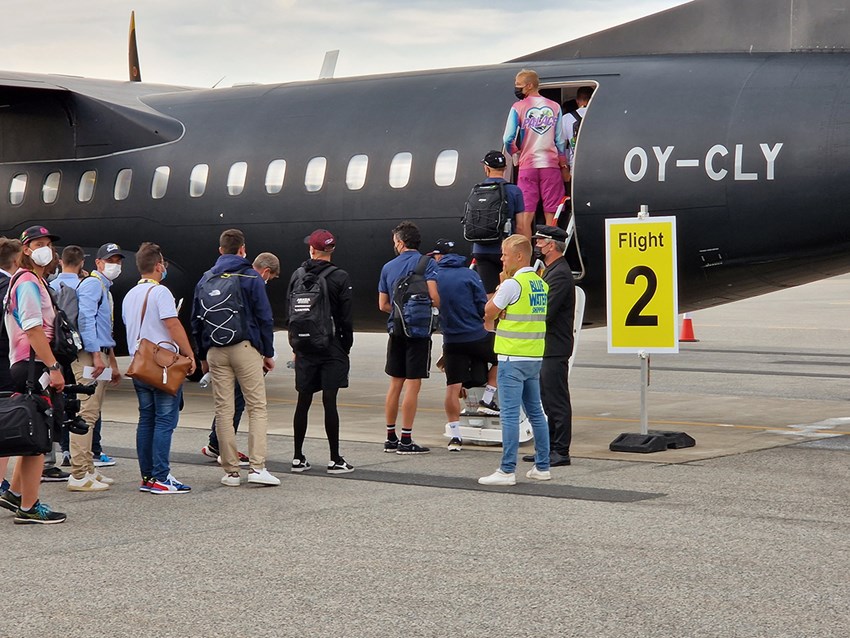