The day after the war broke out in Ukraine, Blue Water was contacted by a client who needed our assistance with unloading four aircrafts over the weekend. The aircrafts would land at the Rzeszow-Jasionka Airport (RZE) in Poland about one and a half hours’ drive from the Ukrainian border.

Our scope was to get the cargo safely to the border of Ukraine including the handling, counting and reloading of the cargo and to make sure the delivery was complete. Next step was to place all items on pallets before loading them onto trucks for the border delivery. The first supply consisted of 240 pallets of first aid kits, hygiene kits and medicine to the refugees inside Ukraine.

After the research for local partners at the airport of Rzeszow-Jasionka and for local trucks, we quickly succeeded in organising a reliable setup, and the first load from England arrived later the same day. The night between Saturday and Sunday, we reloaded two aircrafts/four loads of 60 pallets delivered to Neutral Zone at the Korczowa-Krakovets border. Consignee was the Ministry of Health in Ukraine who had arranged Ukrainian trucks under police escort at the other side of the border.

Challenging logistics did not stop the transport

It was a so-called First-Mover arrangement to the Neutral Zone in Ukraine. Confusion reigned among customs officers and border guards as the normal permits were suspended, and there was no pallet lifters or forklift trucks, so we had to strip and reload all goods manually as well ensure that nothing was lost or stolen.

”The client’s own team was present at the RZE Airport as well as at the border, assisting with the physical reloading in the middle of the night. By joint efforts everything went without a hitch, and the goods were delivered at the Ukrainian side of the border late Sunday. Monday, we received information that all equipment and medicine had already been distributed in Lviv”, says Johnny Mortensen, Head of Aid & Development Logistics at Blue Water

”Subsequently, another six charter aircrafts were reloaded and delivered during the following week and weekend. The amount of trucks at the border was now so massive that we queued for hours and hours, and during the nights we took turns to sleep and work. However, it feels good being part of a setup that makes a difference and contributes to helping the many refugees and people in need in Ukraine”, concludes Johnny Mortensen.

Until now, Blue Water has delivered approx. 2000 cbm of equipment to Ukraine – at the Korczowa-Krakovets border. As the clients now want their goods delivered at Lviv and other regions without reloading at the border, our Aid & Development Logistics team is busy helping the NGOs and our other partners. As we all know by now, there is a flood of relief goods coming in from all over Europe, and all airports in Poland, Rumania and Moldova are running at full pressure. 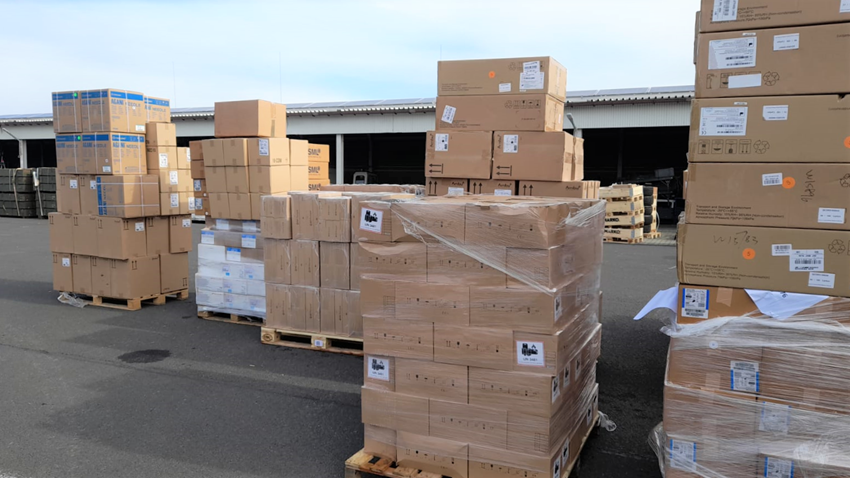