The five-year TCO project is completed

A sunny day in October 2020 was an unforgettable day for Project Director Claus V. Laursen and the rest of Blue Water. The delivery of the final module at the purpose-built cargo transportation site in Prorva, Kazakhstan marked the last transportation milestone for Blue Water and its four consortium partners under
the Tengizchevroil (TCO) Future Growth Project-Wellhead Pressure Management Project (FGP-WPMP) contracts.

The first module was delivered in April 2018 – and two years and six months later, the last of 285 modules reached Prorva. All modules – the heaviest weighing 1,800 MT - were delivered safely and on time.

"It has been an impressive achievement by everyone involved in the project management and logistics during this project. The preparation started in 2015 – the first modules delivered three years later – and
now completing it all three years later.

We are very proud to have been part of an extremely successful logistical challenge and very humble that TCO chose Blue Water to project manage the four contracts," states Claus V. Laursen, who has been Blue Water's Project Director throughout the entire project.

During the contract negotiations in 2015 and 2016, many different options and scenarios were discussed with TCO to develop the best and most efficient logistics proposition for this world-class capital project. At all times, safety, schedule and quality were considered the primary drivers.

“This was a first of a kind project into the Caspian Sea, and there were no benchmark or previous projects to consult during this difficult but, for the success of the project, very defining period. So, a lot was at stake during these negotiations – both for Blue Water and TCO,” says Thomas Bek, Global Director for Energy and Projects at Blue Water.

Vessels built to the purpose

Transports of special cargoes through the Russian Inland Waterways have traditionally been done by tugs and barges. However, due to the size of the TCO FGP-WPMP, the existing fleet of Russian-flagged barges and tugs would not be sufficient to meet the tight project schedule.

Decisions had to be made to either build additional barges or investigate alternative modes of transport. Known concept, operational knowledge and decades of experience were the main benefits for choosing the barges; operational safety, speed and the ability to build a project-bespoke vessel were the main drivers for the alternative solution, the Module Carrying Vessel (MCV).

To mitigate potential risks, the pioneering solution was to design, build, and commission 17 new MCVs, construct four barges, upgrade another seven barges and project upgrade around 30 tugs to tow and push the barges from Bulgaria and Finland to Kazakhstan. 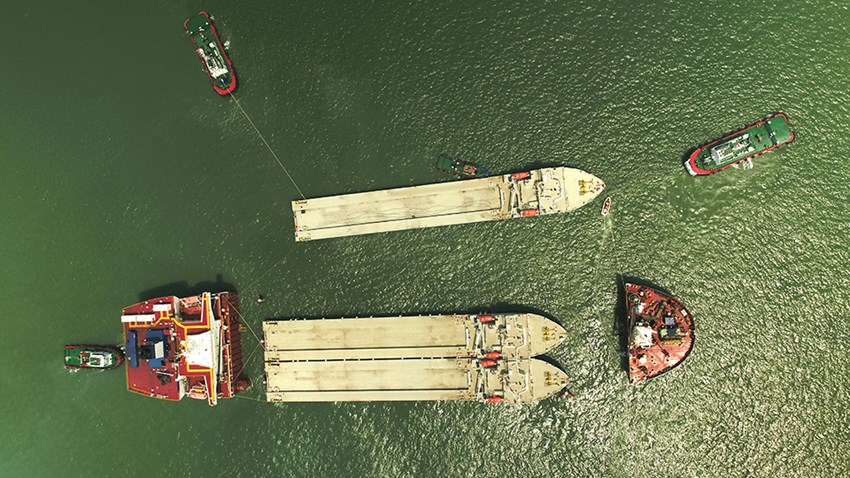 For the MCV contract Blue Water was the lead in a consortium with P&O Maritime Logistics.

“Due to the scale of the order combined with a very tight delivery schedule, the 17 MCVs had to be constructed in three different yards – one in Vietnam and two in Romania. The pressure was high from day one as no one had ever constructed 17 vessels based on a new design in such a short span of time before,” states Thomas Bek.

To ensure the highest possible safety on site, the timeline was kept, and complete transparency was maintained, Blue Water, along with our partners and client, mobilised strong and competent construction management and HSEQ management to the various sites.

Contrary to potential concerns, early progress indicated that the construction schedule would be achievable. But many challenges would still lie ahead, with the final sea trial being the ultimate test of quality and operability of these types of vessels that had never been built before.

As time would tell, the MCVs matched the project's full expectations.

Width challenges required out of the box solution.

Concurrent to constructing the 17 MCVs to operate in the Russian Inland Waterways, Blue Water signed a second consortium agreement with KazMorTransFlot (KMTF).

This contract with TCO required three Caspian Sea-specific MCVs, which needed to be wider than the river MCVs as they would have to carry much wider modules. The width of the three MCVs was 21 metres – and to get from the yard in Romania to the Caspian Sea, they would have to navigate the Volga Don and its locks with a maximum width of 17.77 metres! 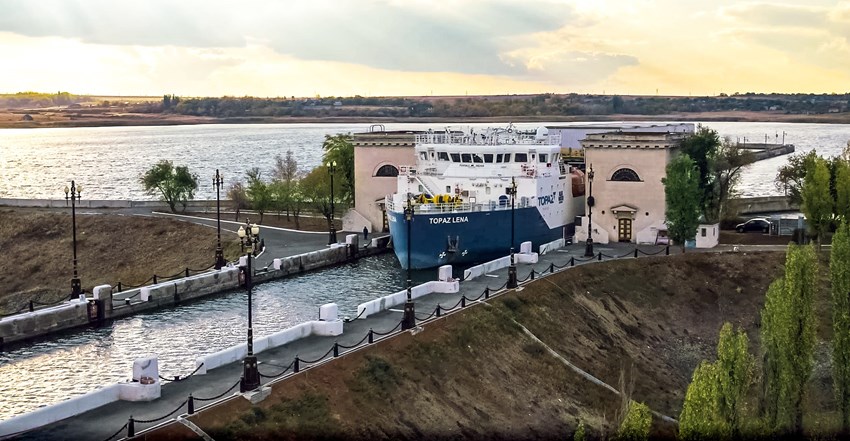 The solution was to sail the vessels to Tuzla, Turkey where they had their wing tanks on both sides removed. This exercise made the vessels 16 metres wide and able to be towed through the Volga Don. In Baku, the three vessels were taken ashore to reassemble the wing tanks and to refit all the installations that had been dismantled in Turkey.

Upon signing the first contract with TCO, Blue Water set up a project headquarters in Farnborough, UK. Here, Blue Water's personnel would sit in-house with TCO and their other main contractors, executing the complex supply chain.

"This being the biggest contract ever awarded to Blue Water and the biggest EPC contract awarded globally in 2016 made everybody involved in the project very focused on the tasks ahead. But the full extent of the project was still hard to understand as we were still negotiating further contracts with TCO that would increase the total scope of work significantly,” says Thomas Bek.

The third consortium with Manchester Shipping covered 11 barges and 30 tugs for transport of modules from Hamina through the Russian Inland Waterways to Prorva. It was determined that four barges would have to be newly built – and seven existing barges would need an upgrade. 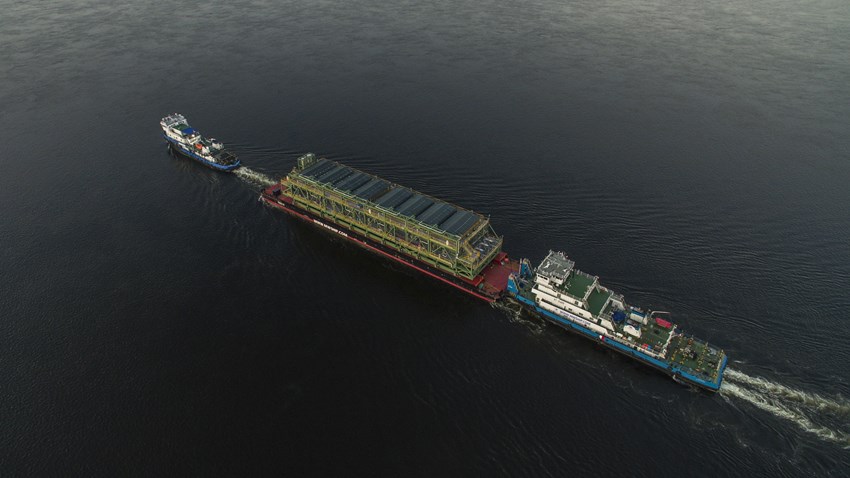 “The upgrade and new build of the barges were not easy, but through joint effort, hard work and a lot of commitment from all parties, the barges were delivered in the spring of 2019, ready to load out modules from Finland,” states Claus V. Laursen.

The ecological and environmental considerations when shipping to the Caspian Sea are very important. Due to the unique ecosystem in the Caspian Sea, Blue Water had been contractually committed to adhere to the highest norms and standards in relation to ballast water – and treatment of same. Therefore, state of the art ballast water treatment systems on the MCVs and barges had to be installed.

The summer of 2017 saw Blue Water concluding the fourth and final consortium agreement with Caspian Offshore Construction (COC) for the design, build, and operation of six custom-built tugs to support the cargo operation through the Cargo Transportation Route (CaTRo) channel into Prorva.

TCO had to build a 75 km long channel from the shores of the Prorva peninsula to a deep-water location in the Caspian Sea. At TCO’s Cargo Offloading Facility in Prorva, Blue Water's local team discharged 408 large cargoes – 285 of which had been transported by Blue Water together with our partners.

“We worked hard to find the right experts, but we also focused a lot of our energy on encouraging everyone to work as one team. Key to our success were competencies, preparation, willingness to find solutions – and strong team spirit,” says Claus V. Laursen.

As preparation progressed, site offices were established in the critical areas: Prorva in Kazakhstan, Kuryk in Kazakhstan and the two European loading ports Burgas in Bulgaria, and Hamina, Finland. At the sites, Blue Water was responsible for all engineering and load in & out documentation to ensure a safe operation performed by all stakeholders and partners. 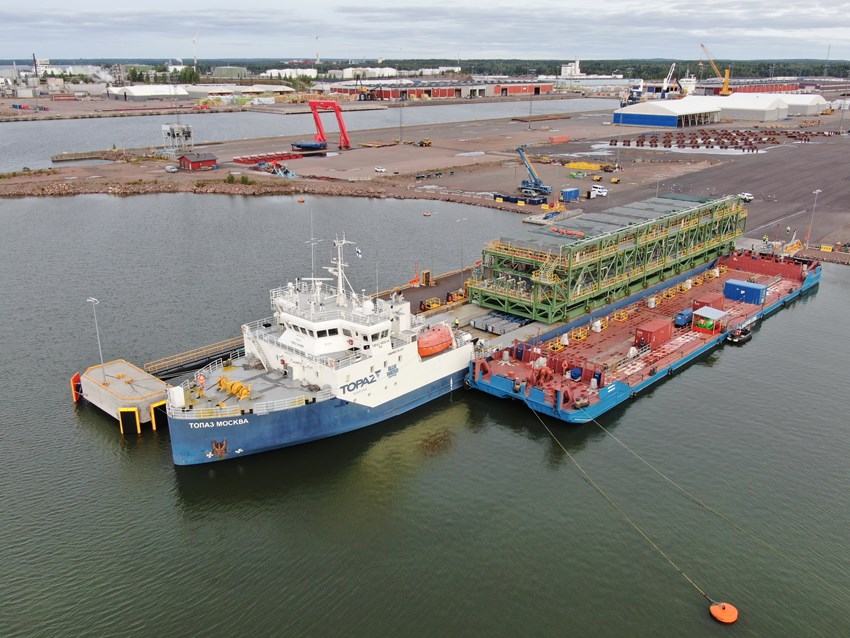 Project-wide, more than 4,900 technical documents were issued by Blue Water. Furthermore, Blue Water was responsible for designing, manufacturing and fitting the sea fastening materials that would ensure the safety of the modules during the voyage to Kazakhstan.

"As the vessels were being built, upgraded, and delivered, the sites were springing to life, and all the various stakeholders were finding their place in this massive logistical puzzle. But the preparations for the actual transportation were still ongoing with kick-off meetings, HazID meetings, issuance of processes and procedures, schedule simulations, test loadouts and much more. And all the "what ifs" were discussed in ways of risk assessments and mitigations”, states Claus V. Laursen.

Due to the method of loading where the aft end of the MCV or barge is moored against the quay (Mediterranean mooring), and the fact that the cargo was almost as wide as the MCV and barge, made the access to the vessel for welding (and removing) up to 22 units of up to 135 kg sea fastening brackets impossible.

Blue Water, therefore, proposed access platforms in both the load ports and at the discharging facility in Prorva. These were unique systems that assured safe access to the work areas and a lot of storage areas for materials.

April 2018 was a key milestone. The first loadout of a module – and it was from Kuryk in Kazakhstan. Over the next two years, the Caspian MCVs and the three backup barges did an outstanding job delivering ultimately 89 modules from Kuryk to Prorva. They were so successful that the anticipated third season never materialised. A sign of successful delivery on the scope.

July 2018 would mark the first loadouts from Bulgaria and Finland. The cooperation between the vessel crew and the Blue Water site crew and engineers went very well, and the first loadout gave everybody great confidence that the MCV concept was a success. 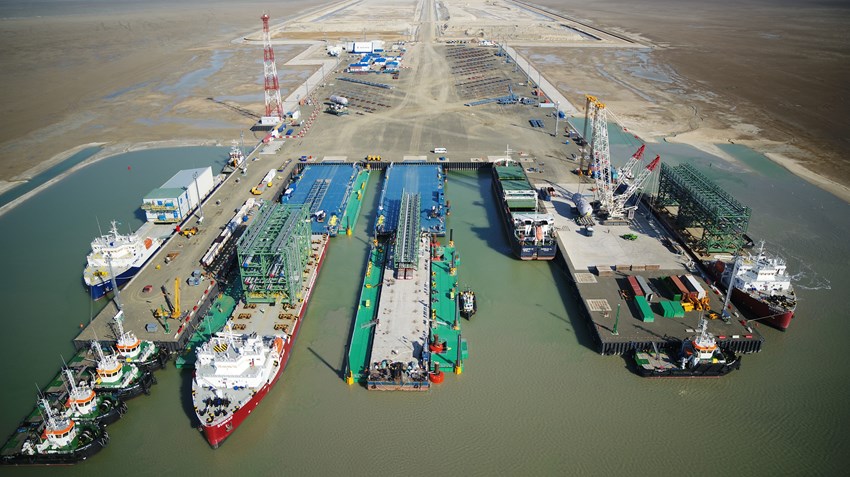 The next challenge was the first navigation through the Russian Inland Waterways with a full module on board. A lot of preparation, simulations and planning had naturally been carried out, and that work indicated that it would be a success. But it takes an actual passage to confirm it.

"We were all smiles when the first vessel arrived at Astrakhan, Russia ready to navigate the last part of the voyage – the Caspian Sea and ultimately navigation of the 75 km long channel into Prorva. All went well, and the offloading operation in Prorva under our management went as planned. The first voyage proved that all the planning in the lead up to the first voyage had not been in vain – and it promised well for a successful delivery campaign,” says Claus V. Laursen.

Both 2018 and 2019 ended on a high in terms of schedule, safety and performance. Blue Water successfully delivered all the modules scheduled for each season.

"We even ended 2019 better than expected, and we were all confident that with the lessons learned from the previous two seasons, we would be in a strong position to finish the transportation scope by the end of 2020 and not go into a fourth season in 2021. Little did we know that the world was about to face a pandemic that had not been foreseen in any of the many risk assessments conducted across the project," states Claus V. Laursen.

The project was forced to introduce new solutions and procedures to keep the operation running. Aside from following the general guidelines, there were stringent rules applied to specific sites to prevent the spread of the virus.

Amongst others, this meant that many employees on site had to extend their rotations by months to ensure continuity. It was of course not only the Blue Water staff that committed to a very different way of working throughout 2020.

The crew on the 60 vessels under Blue Water contracts had to commit to more extended stays on board, workers on site had to work under much stricter guidelines, rotational personnel had to isolate on every rotation etc. It would require a real team effort to make 2020 a success, just battling the consequences of the coronavirus.

"But with a tremendous effort and dedication, we managed to move forward as planned. Taken all challenges into consideration, the 2020 season shows team spirit like never before. Delivering the last module was both a very happy and very sad moment. Happy because we had performed with great success. Sad as it marked the end of this first of its kind project", states Claus V. Laursen.